Zweihänder, literally translated as “two-hander”, are very large great swords that served as shock weapons for 15th-century German and Swiss mercenary forces known as landsknechte. As the name implies, the zweihänder is a large two-handed sword that could crush enemy opposition with sheer momentum. This sword derives from the standard German longsword, but the zweihander could be up to a foot longer (up to 72 inches) and twice as heavy (up to six pounds). Tactics that applied to the longsword translate to the larger sword to some degree, but the weapon’s weight and inertia when in motion made control less of a factor than power.

Also called by the terms doppelhander or bidenhander in German, as well as the Iberian form montante and Spanish spadone, the zweihänder sword is believed to have primarily saw use on battlefields as a shield wall and pike formation breaking tool. Although a spear could stand up to or even set aside a blow from a longsword, the pike and other kinds of polearms were longer and more unwieldy, allowing a strike from a zweihander to force it aside because of the comparative lack of leverage the pikeman would have compared to the swordsman.

Zweihander swords are often erroneously called a claymore in popular media. This confusion originates from a mistake made in the 1911 edition of the Encyclopædia Britannica. For more detailed information about confusing terminology used by historians to describe European medieval swords please read our article, “What is a Long Sword in HEMA? An Evaluation of the History Context Behind Fechtbücher“.

Here at Historical European Martial Arts Resources we have a page dedicated to listing numerous martial art instructional manuals that have been written that teach how to use a great sword such as a zweihander / montante / spadone. You can read more about how to use a zwerihander on this page, Path of the Great Sword. This article will otherwise discuss in more detail some general information about the zweihander sword and how they are used in HEMA clubs that practice this historical fencing material.

The longsword (sometimes also called a hand-and-a-half sword or a bastard sword, though this varies) served as a sidearm for knights during the late medieval and early Renaissance. Plate armor made the sword obsolete for use as a cutting weapon, leading to the rise in blunt-force weapons like the warhammer and poleaxe, but also resulted in the development of longer bladed swords with extended handles that can be used to gain more leverage, making thrusting techniques to the weak gaps in armour (such as the gaps in helmets, the neck and under the armpits) more effective. Techniques such as the mordschlag (also spelled as mordhau or mordstreich) allowed the longsword to serve as a makeshift bludgeon by striking with the crossguard or pommel.

By contrast the zweihander was primarily used as a breaching weapon in military warfare. Unlike the longsword, this great sword is a large two handed weapon designed for skirmishing lines of pikemen. Infantry formations in the early Renaissance consisted of pikemen or spearmen arranged in a square to counter heavy cavalry by creating a fixed wall of spears that would theoretically kill the oncoming horses, and was meant to render cavalry charges from knights less effective. This tactic coupled with the increasing usage of cannon on the Renaissance battlefield made traditional cavalry of heavily armored knights far less effective than they had in the past.

Soldiers wielding zweihander swords were designed to counter pikemen formations; lines of specialized soldiers fighting with zweihander charged at the pike line, beating aside and breaking spear heads with sweeps of their mighty swords.

Depiction of soldiers using great swords to break up a line of pike men, at the battle of Kappel on 11 October 1531. Source: Johannes Stumpf, Hans Asper / Public domain

The typical zweihander sword has two protrusions a third of the way up the blade called parierhaken, or “parry hooks.” They are sometimes also called schilden, which means ‘shield’. These hooks work as a secondary handguard above the unsharpened ricasso of the blade to use half-sword techniques, similar to those used with a polearm. The hooks can also be used to deliver some certain attacks, too. The ricasso of the blade also has a leather wrapping to facilitate an easier grip. Even in normal grip, the parierhaken aided in creating leverage as well as protected the swordsman’s hands from a sliding blade. 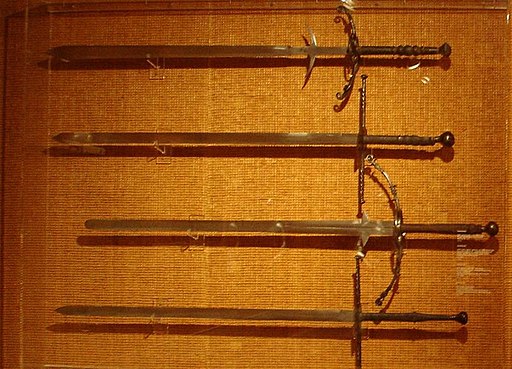 Despite popular misconception and what you would expect, while there is some cross over German longsword techniques are not identical to zweihander techniques. While both swords rely on combining attacking from positions that also allow for defense, the zweihander can be considered a more defensive oriented weapon compared to the long sword as its longer striking range deters opponents who are wielding shorter weapons.

A zweihander has a clear and obvious advantage against a long sword and can be used to fight several opponents at once, which is otherwise difficult to do when using a shorter sword. For this reason the zweihander was also considered a good weapon for bodyguards that needed to protect their employers.

Advantages and Disadvantages of the Zweihander

The zweihander’s size makes it an excellent weapon for breaking defenses such as shields and pike formations. The psychological effect of such a large blade likely also plays a part in influencing the outcome of a fight. It is an ideal weapon for specialized shock troops such as the Landsknechte and was historically associated with them.

However the size of this sword can also work against it. Only a highly-trained soldier can wield it effectively. The blade length also means that the weapon cannot be wielded in confined spaces; they are weapons best used in open fields.

Another drawback is the cost to manufacture. Even a smaller arming swords is labor-intensive to forge. Zweihanders, being larger versions of these, are even more demanding of a smith’s time and effort and would test a smith’s skill. There would probably be fewer smiths able to manufacture a good great sword such as this, and so the cost to produce them in mass for arming and replacing broken blades would be higher than just using a cheaper to manufacture poleaxe.

These drawbacks — that they required more training to use and were a more expensive weapon — meant that the soldiers who wielded zweihander swords were considered Doppelsöldner, or “double pay men”. That is they were paid double to fight with this special kind of sword and break up pikemen formations. This was the largest motivation for a man to learn how to use one.

The zweihander stands out in history as one of the more feared weapons of medieval Germany and has continued to inspire storytellers in popular media today. Indeed, great swords such as zweihanders are popular weapons in fictional fantasy novels, movies and video games. This is one of the reasons why many people wish to learn how to use one today in HEMA clubs.

We hope this guide helps you start your journey into learning historical sword fighting with great swords such as zwerihander, montante, spadone and others.

If you’d like to learn more information about historical fencing practices please check out our Learn HEMA page for a guide to learning about the historical weapon that interests you. You can also find more guides we’ve written about other topics at our Helpful Guides page. You can also join the conversation at our forums.

HEMA vs Kendo: How Do These Sword Styles Compare?