Many people who are interested in Historical European martial arts (HEMA) are also interested in studying the large two-handed messer sword variation, which is commonly called a Kriegsmesser. This short article discusses how to learn sword fighting with a Kriegmesser and what kind of techniques work best with it.

What is a Kriegsmesser Sword?

The messer was a very popular type of sword used during the Middle Ages and Renaissance period of European history. While the various names are often used synonymously, messers are divided into two main types: 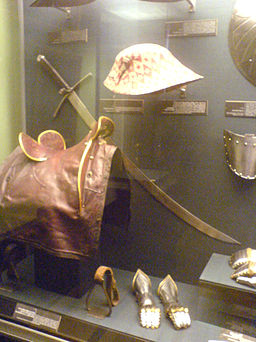 A Kriegmesser in the Hofjagd- und Rüstkammmer (Court Hunting and Armory Chamber) in Vienna, Austria

The messer was part of the curriculum of several Fechtbücher (fighting manuals) of the 14th and 15th centuries, often in the form of dussack plays, which is simply the Czech word for a messer-like weapon and became popular to refer to the messer as among the Germans in the 16th to 17th centuries. The same can be said about the falchion, which is the French word for this kind of weapon. It was also sometimes called a ‘hanger’ by historians, though this is a much later term that was meant to apply to cutlasses

How to Learn to Use a Kriegsmesser for Sword Fighting

Unfortunately at present there are no known surviving documents that describe specifically how to use a Kriegsmesser sword but you can utilize techniques from long sword and messer manuscripts when wielding this weapon. The longsword is a two handed sword that was widely studied and a Kriegsmesser has some similar properties to it. It would be ideal to study Armizare, the so-called ‘Italian longsword’ style of Fiore de Liberi, and possibly couple it with some of the information from Johannes Lecküchner’s manuscript on messer work.

For information and resources on how to learn the long sword, please check out our Path of the Longsword page.

For information on how to learn to use a messer one-handed sword, please review the messer section on our Path of the Saber page.

If you’d like to learn more information about historical fencing practices please check out our Learn HEMA page for a guide to learning about the historical weapon that interests you. You can also find more guides we’ve written about other topics at our Helpful Guides page. You can also join our Facebook community and ask additional questions there.